13 most beautiful places in Scotland 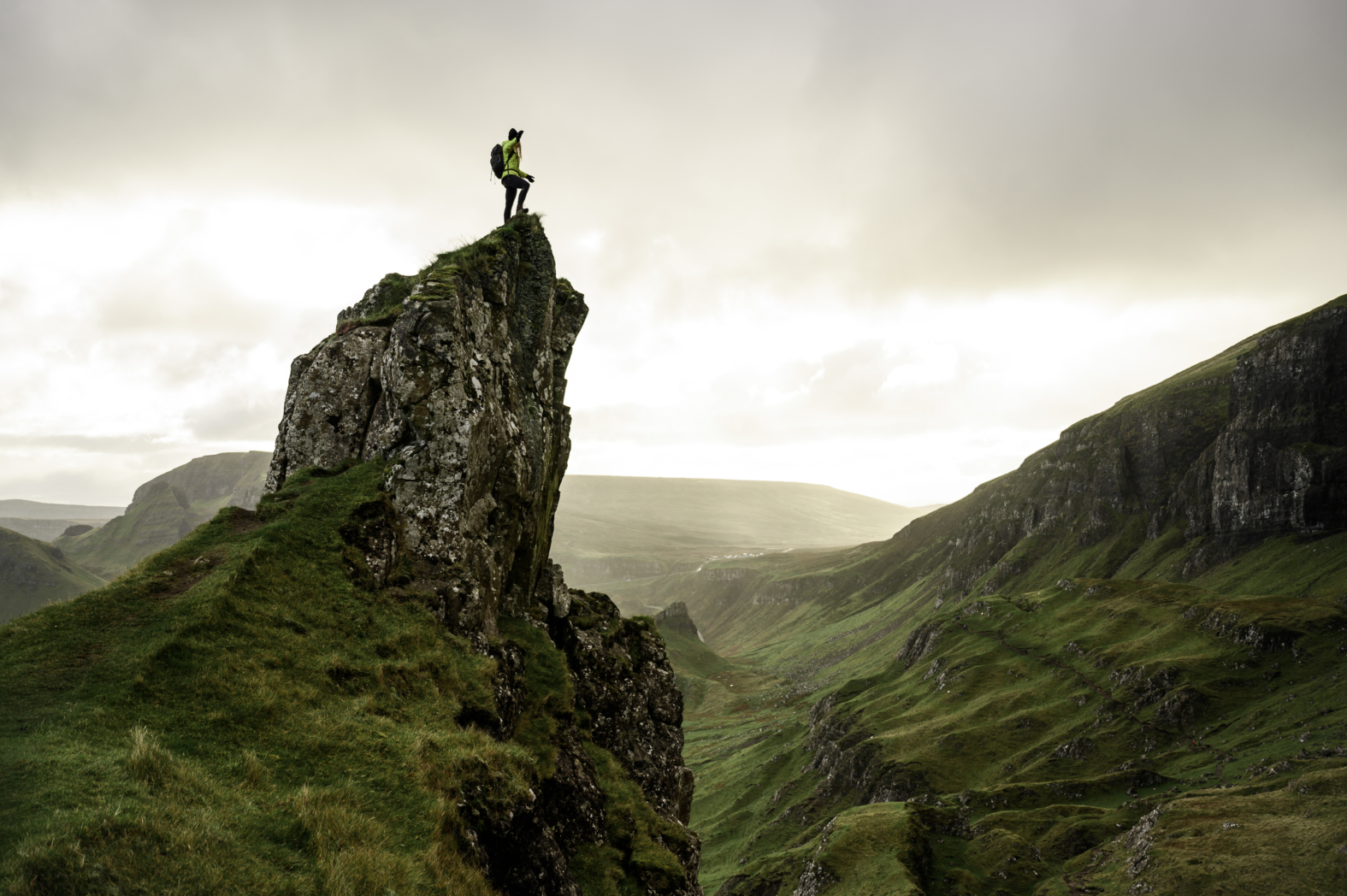 Given the tiring preparation for Eco-Challenge, I didn’t have much time for those spontaneous trips with my mom. She obviously had a craving for such a trip, because when I was still in Fiji, she wrote me, that she found some super-cheap flight tickets to Scotland and wondered if I was going to rest after returning from the world’s toughest race or had the capacity to travel again. Well what do you think…

So here we were, on a plane to Edinburgh shortly after returning from Fiji.

We arrived in the evening, so we all we did was a walk and a cocktail 🙂 Since my mom has never been to Edinburgh, we did all the “must sees”, rented a car and headed north, into the mountains. At first we were circling several roundabouts a few times before we got used to left-side driving.

Even though we wanted to run up to Ben A An (454 m.a.s.l.) in the evening and camp up there, in the end we were more than happy to set up our tent on the shores of beautiful Loch Achray.

While unpacking, we discovered a TV remote control between the cutlery. We couldn’t explain it at all, because my mom doesn’t even have a TV and I last watched the TV about two years ago. Finally, we realized that we accidentally packed it in our hotel in Edinburgh. We couldn’t stop laughing for another half an hour.

In the morning we woke up for the sunrise, of course, and after breakfast we finally climbed Ben An‘n. There was a hell of a wind & fog on the top, so we couldn’t see anything at all. We met a guy who spent the night up there saying that neither sunset nor sunrise was visible, so we were a little relieved that we didn’t miss anything.

We continued on to Bridge of Orchy, where we left the car and set out on the West Highland Way, one of the most famous long-distance hikes in Europe. It’s 155 km long and you need 6-8 days to complete it. Unfortunately, we didn’t have that much time, so we decided to do a part of it. From Bridge of Orchy to Glancoe and back to the car (about 70 km in total), which doesn’t seem logical, but given our plan, it was the only possible solution. We wandered through the beautiful Scottish Highlands, across Rannoch Moor, past crystal clear lakes and swamps, passing waterfalls, sleeping on fluffy meadows, drinking from streams. We washed in them too. Well, sometimes.

Around Glencoe, below Buachaille Etive Mor, we were admiring the magnificent architecture that fit into the stunning Scottish countryside perfectly. We did one short hike around Ballachulish. We promised ourselves that we definitely have to get back to this area. Like all the destinations we’ve been to.

We drove the last part of WHW to Fort William by car. Unfortunately there was no time for conquering the UK’s highest mountain, Ben Nevis, either. We grabbed great coffee in the town and went to Isle Of Skye. Along the way, we stopped by Glenfinnan Valley to see the famous Harry Potter viaduct. There is a steam locomotive going to Hogwarts, so we waited for it along with dozens of other tourists. We got there on time (a bit after 10AM), but a day late. It doesn’t come on the weekends. By the way, did you know this viaduct is on the Scottish ten-pound note?

We headed on to Mallaig, where we were supposed to hop on a ferry. But we kept pulling over and taking pictures along the way. We also stopped at a random lake that I don’t even know what it’s called. As we were passing, there was no wind, which in Scotland is pretty rare, and the water in the lake was like glass. It was reflecting the surrounding hills, which was absolutely beautiful. I pulled out my drone again. The whole show took about 15 minutes, then the wind started to blow again and it was gone. We almost missed the last ferry.

We managed to catch the last ferry and arrived in Broadford, where we spent the night through Airbnb. By the way, during fall (off season), it’s really hard to find a hotel or b&b on Isle of Skye. There are only a few of them and they are incredibly overpriced.

In the morning we went south – to the fishing village of Elgol. This is the dream of every introvert. The village has about 5 houses and we didn’t see a single human in those few hours. I even read that the whole village is for sale, for about 1.5 million pounds. Well, we didn’t buy Elgol, but we strolled along the beach and took some pictures.

Then we stopped at the area praised in each guide – the peak Old Man Of Storr.

There we finally got to know what the term “Scottish weather” meant. I experienced horizontal rain for the first time, and I think it was even raining from the bottom. The dirt path turned into a giant slide in a few seconds. It was still ok on the way up, but the fun started on the way down. My mom tripped at one point and rolled down the hill. From a distance it looked like a scene from Tom & Jerry. All I could see was her red backpack rolling down like a ball. I was a little scared, but when I found out that my mom was laughing out loud at the bottom, I laughed too.

Next part of the car journey continued in her underwear, because the pants wrapped in mud would’nt even bend. And Old Man of Storr? Well really cool rocks. But for our taste too many tourists who absolutely didn’t respect the official paths, so after the rain it looked like a herd of highland cattle ran through there.

We continued to Quiraing, which totally left us speechless. The landscape of Quiraing was shaped by a tectonic break, consisting of pointed basalt peaks and table-shape mountains, overgrown with lush greenery. Sheep climbing the steep slopes and minimum of tourists. We explored the whole area and returned after sunset. Clearly one of the most beautiful places we’ve seen in Scotland. Wait, haven’t I already said that?

There’s a network of bothies in Scotland (as in the Nordic countries). These are tiny shelters which could be used by tourists tourist when they’re hit by bad weather. Therefore they’re permanently open. Definitely not for commercial use, there is no electricity or toilet. If you burn wood, you need to refill it. This is an amazing way to survive a night in the rugged countryside of Scotland. Fortunately, most of bothies are in quite inaccessible places, so they are mostly used by real tourists. We got a great tip from Jakub Mařík for one of these bothies. Rubha Hunish is a former whale watching station. I couldn’t imagine a more romantic place to sleep.

The next day we went to Neist Point with a photogenic lighthouse, probably the westernmost point of the Isle of Sky. Beautiful windy place, we look like jellyfish in all the pictures.

We slowly took the direction south. Along the way we stopped in the Glen Brittle Gorge, where the Brittle River forms so-called Fairy Pools, beautiful and crystal clear lakes. Unfortunately the weather stopped cooperating, so we headed to the bridge at Glen Sligachan, known from a Scotch whiskey commercial. From there you can admire spectacular views of the Cuillin Mountains. We didn’t have time to explore them any further, but they’re definitely in our bucket list.

Interestingly, we did have time for dinner in a local restaurant. Of course we tasted local dishes. Smoked cod fish soup was fabulous. We also tasted the national dish called hagiss, which conists of sheep’s hearts, liver and lungs, mixed with sheep tallow, spices and oatmeal and cooked in sheep stomach for several hours. Although the ingredients sound pretty disgusting, the meal was delicious and we were glad we risked it. What we didn’t taste was Scotch whiskey since we’re not big fans of it.

The last day we crossed back to the mainland, this time over the Sky Bridge, and headed to Edinburgh. It was raining all day, so we will have to leave Cairngorms NP for our next visit to Scotland. The area is so beautiful that we would only be angry that we had little time for it. In the evening we arrived in Edinburgh, and of course we didn’t remember to return the TV remote, so if any of you guys is planning on going to Edinburgh,…. hahaha

Scotland is a beautiful country, we loved it there. We walked many kilometers again, saw incredibly beautiful places, and in those few days we experienced all four seasons. All this with minimum of tourists, which is harder and harder these days.