Christmas in Hawaii – the most epic island called Kauai 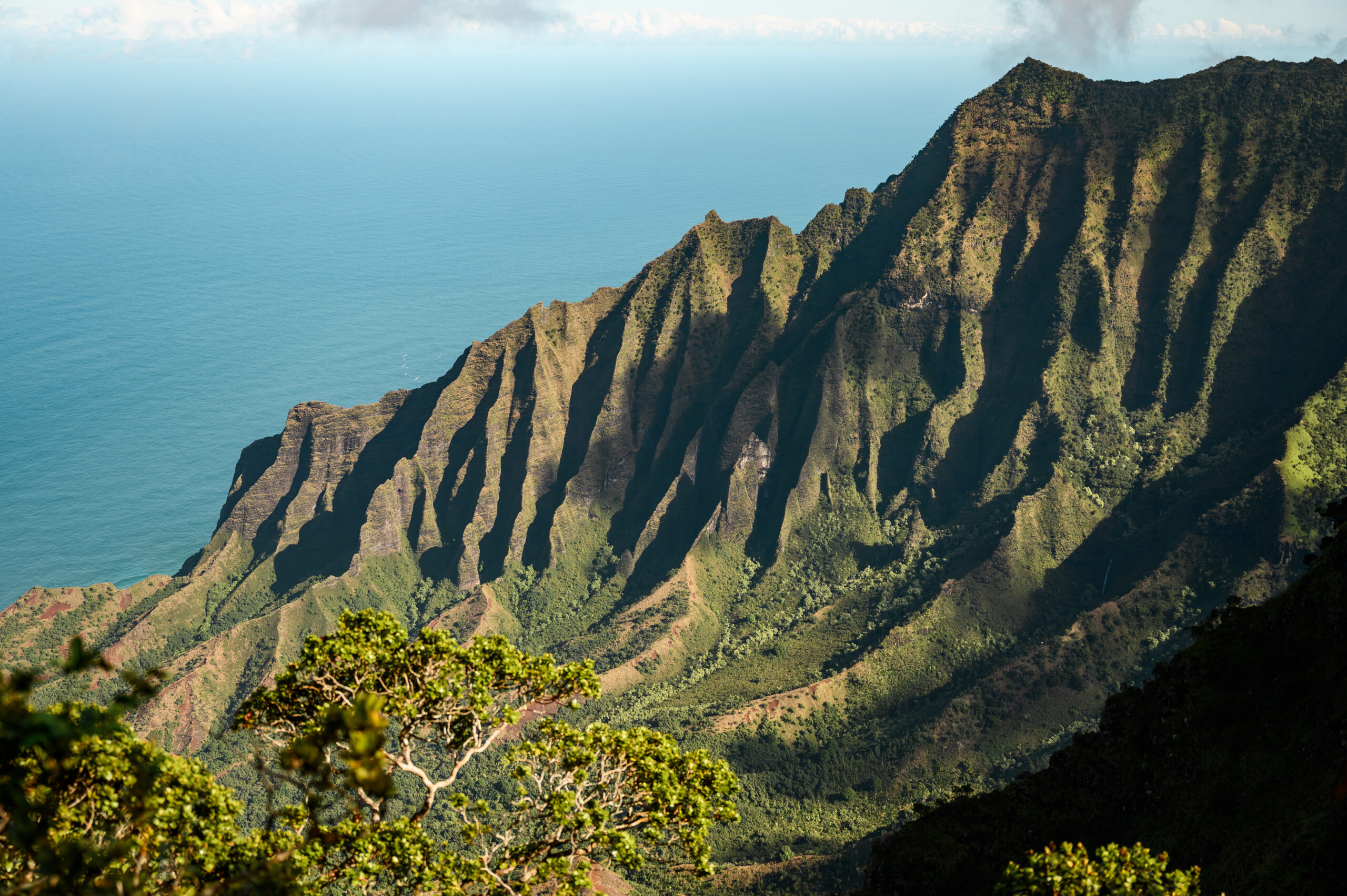 Today I will write about the most beautiful island in Hawaii. It’s called Kauai, and I’m surprised I didn’t hear of it before I visited it. Everyone knows Maui and maybe Oahu, but ironically those were the least interesting to me.

So back to Kauai. Why was it the most beautiful island? It’s a perfect combination of green mountains and turquoise sea. It’s also the rainiest place in the world. It rains here on average 350 days a year. Kauai is also the wildest of the populated islands, as most of its inland is covered by pointy inaccessible mountains.

It was the right choice to spend the Christmas Eve & Day on this epic island. However, I won’t give you any tips on great hotels, because we only slept in two – one on Christmas Day on Kauai and the other in Honolulu on New Year’s Eve. Every other night we slept in the car or tent and I don’t regret it.

Anyway, we arrived in Kauai in the afternoon, rented a car, stopped by Walmart and went to a campsite. The camp was pretty scary and full of weird people, so we ended up sleeping in a car in a nearby park (there goes a point for my mom that she managed to sleep in the car – and not just once!).

In the morning we got permits to two other camps, enjoyed a great coffee in Lihue and went on the first checkpoint – Kilauea Point, which located in a bird sanctuary, so you can admire all the birds of the Hawaiian Islands. We admired the lighthouse indstead, but it was closed the day before Christmas. Nene geese kept us company while walking around. Funny how passing cars didn’t excite them at all. There are signs all over the island warnign that Nene might be crossing the road, so the speed is often reduced to 10 miles/hour.

Then we went to Queens bath, which are little ocean ponds, created on the lava shore. There is beautiful clear water and from time to time a larger wave is poured over the edge, which is just enough adrenalin to fall in love with this place. We went for a swim with the others and then we walked further along the coast and discovered an amazing pond where we were alone.

We continued through Princeville, a millionaire resort with golf courses and luxury hotels, to the beautiful surf town of Hanalei to Ke’e Beach, where the Kalalau Trail starts and stretches across the Napali Coast. It was our dream to do this two-day hike. It’s said to be the most beautiful hike in the world, and what we saw only confirmed it. However, the number of tourists is quite regulated due to nature protection and the permits were sold out at least two months in advance. At least we looked at the beginning and came back across Hanalei. In the evening we camped in Anini Beach Park.

The next day was December 24th. We slept like babies but crowing roosters woke us up pretty early. There are an incredible number of wild roosters & chickens in the Hawaiian Islands. They live on beaches, in the rainforest, in the craters of the volcano and in the cities. And most of them were always in very close distance to our tent. At 4 AM they started crowing and didn’t stop until we got out of the tent. I threw shoes and water bottles at them, but not only I didn’t hit a single one, but also it encouraged the roosters to grow even louder. This was the first trip during which I was up around 5 in the morning. Well, at least our days were long and my mom was glad that she didn’t have to pull me out of bed.

It was raining since the morning, however we didn’t want to skip swimming in Santa’s hats on Hanalei Beach, so we did! In Hanalei we bought a Christmas gingerbread, and headed to Kapa’a, where we had our first hotel booked. For the first time since arriving in Hawaii, we had a hot shower. We recharged all the batteries – our room looked like a public charging station, haha. All outlets were occupied by phones, laptops, cameras, stabilizers, drones Gopros and powerbanks. I’m surprised we didn’t blow the fuses.

In the evening we dressed in long dresses, put some make-up on and went for a Christmas dinner at the famous steak restaurant Bull Shed (the whole time I thought it was called Bull Shit haha).

We were a little surprised that most of the other guests were wearing shorts and flip flops. But we were definitely the most beautiful ones there that night. We had shrimps & steak and drank a whole bottle of wine.

On the Christmas morning, we chilled by the pool until lunch and then moved to Poipu Beach. The only physical activity we managed that day was a trip to Spouting Horn, which is a hole in the lava, into which the sea waves are pushed and jets into a really cool height. Then we headed to Salt Pond campsite.

And now the real adventure had begun. In the morning we went to Waimea Canyon and Koke’e State Park. The road itself was beautiful, we were constantly stopping on various view points. First we wanted to go to the Kukui Trail, leading at the bottom of the canyon in Waimea Canyon NP, but after the Christmas rains the path was practically impossible to walk on, so we kept it for later. Waimea Canyon is also called the “Grand Canyon of the Pacific” and I think the comparison certainly doesn’t lie. It’s a little smaller, but the depth of 900m is incredible. Especially on an island as small as Kauai.

We gathered all the information in the visitor center, especially about the weather (after heavy rains there was no electricity and some roads were closed) and we went to discover Koke’e State park. We started with the most visited viewpoint – Kalalau Lookout, from where we saw the Kalalau trail and were sad that we weren’t down there at that moment. Another warm-up lookout was the Pu’u’okila Lookout.

It already seemed to us that the ground had dried up a bit and we returned to the Waimea Canyon Trail, a 4 km long trail around the cliffs of the canyon, with an elevation gain of 800m. The dry path was just a myth. We returned completely covered in mud. We slept in Koke’e State campground, where there was even a shower. Even though it was outdoors and cold, we still enjoyed it.

In the morning we set off on the Nu’alolo Trail. At the end there was a vista point with a magnificent view of the Na Pali Coast and the Kalalau Valley. It was partially raining, so we got wet several times along the way, which didn’t actually matter because it was warm, but the trail turned into a muddy slide, so it was really an adventure. We wanted to connect to the Awa’Awapuhu Trail and for that we chose the link, now unmaintained & full of bushes, Nualolo Cliff Trail. I think its name speaks for itself. Even though we were sometimes struggling to find the right route, it was one of the most beautiful hikes we have ever done. We saw the whole valley, and no people as a bonus. I don’t count the roostres. Yes, they were here too!!! In addition, the sightseeing helicopters stopped flying for some reason, so it was such a wonderful silence. We originally considered a helicopter ride over the valley too, but in the end we stated that we didn’t want to take part in this circus.

In the morning we went to the bush again. We set off on the Pihea Trail to Pihea Vista, but the path was terrible after the rains, we slid like a soap. After returning to Kalalau Lookout, we climbed over the railing (I know it’s wrong but the landscapes were so inviting!) and headed for the valley. After about an hour, we came across a natural “skywalk”, where we took probably the most beautiful photos. We spent about 2 hours there, I ran out of camera battery, but I will probably never see a more beautiful view. When we returned to the camp, they managed to turn on the electricity after four days, so we had coffee and something small to eat in the visitor center – coconut cookies, if you’re interested.

There was some signal at the visitor center and so we started getting messages from people wondering if we were okay. We didn’t understand, but the ranger informed us that a sightseeing helicopter with 7 tourists from Europe had fallen and they all died. The information spread through the news around the world. We were out of signal for 4 days, so friends thought it was us. One of our friends even alerted the local police to verify that our names were not among the victims. Ugh.

In the end, we finally did the already mentioned Kukui Trail, which leads down to Waimea Canyon. The sun came up for the first time, so we got burned immediately.

In the evening we returned to the camp at Salt Pond, where we tried to dry up the stinky tent, while we were experiencing an absolutely epic sunset. Yeah, sunsets in Hawaii are really cool!

In the morning we set off for Polihale Beach, but the road was muddy, so we found a different beach to relax on. We stayed around for an hour and then returned to Lihue and Kapa’a, where we spent the rest of the day eating and wandering around the city.

Last morning we went once again (for the third time!) to ask for a permit for the Kalalau Trail, but without success, so we will have to come back here someday. Because it’s exactly a place “you need to see before you die”.

I flew with my drone over Tunnel Beach for a while, which was definitely the most beautiful beach we saw on Kauai. We slowly returned to the city of Lihue, from where we were supposed to catch a plane the next morning. Along the way, I pulled out my drone near Princeville one more time. I found a really cool bridge, so I had to see it from above too.

Finally, we made the last stop at Wailua Fall. Someone told us that there was a secret way down to the bottom of the waterfalso we headed there. I even found an inflatable ring there, so I went to the water and swam under the fall, which was pretty sick.

And that’s all from Kauai. We spent a total of 9 days here and we would definitely stay even longer. If you ever plan to go to Hawaii, be sure to reserve enough time for Kauai. Definitely worth it.

I’m attaching a map with points of interest. On the second map, in addition to other interesting places, there are also campsites in which we slept 🙂

I took my mom to NAPLES