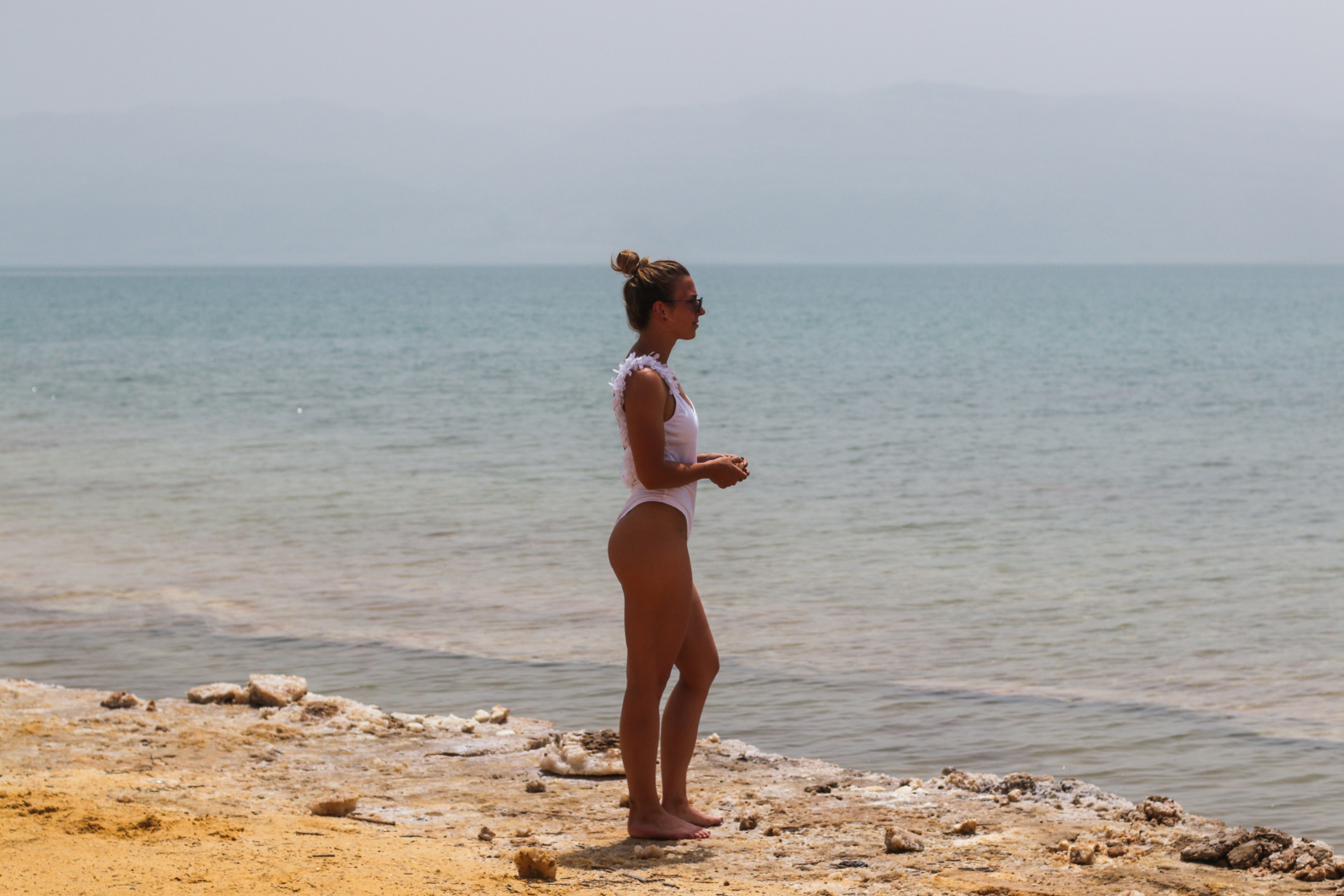 We picked up our rental car in the morning and headed for the Dead Sea. It’s about 100 km, but the entire way is in Palestinian territory, so that was a bit uncomfortable.

We had planned a swim in Dead Sea and a visit of the Masada fortress.

The closer we were getting to our first destination, the higher the temperature was. The surrounding countryside was quite dead, so we didn’t even bother with leaving the car. This lake is 430 m below sea level, and thus the lowest place in the world. It’s really interesting to see how it has been drying out and the coast getting further. Resorts that were on a beach years ago are now hundreds of meters away. Like Ejn Gedi beach, which we stopped by.

We had to get on a tractor (they called it a shuttle, hahaha) in order to get to the beach.

Before we even got into the water, I was forcing my mom to take one NOT BLURRY picture for EOS, which I was testing in the most demanding conditions. And it passed! 🙂 I got to try the one with aloe vera and SPF 30, which hit the spot in these conditions.

The Dead Sea was really beautiful and really salty (duh!). I read several articles about it and all of them said that it was impossible to swim or lay on your chest in the water, so that was the first thing I tried. Well, it is possible, but it’s not worth getting tons of salty water in your eyes. If I poured a liter of shampoo into my eyes, it wouldn’t be that terrible, I swear to God. As soon as I tried to swim on my chest, my butt came up from the water and my head sank under the water immediately.

However, the experience was unforgettable. I would describe it as bathing in dense water, almost oil. The only possible position was literally to sit down.

We had enough of salt after an hour, so we tried to put some mud on our bodies. We looked so ridiculous, haha, I even took pictures, but they’re unpublishable. I’m gonna scare my kids with these once, haha.

Our second destination was the ancient military fortress on the edge of Judas Desert called Masada, registered in UNESCO. Most people go there during the sunrise, but unfortunately we were still in Jerusalem, by sunrise, so we had to deal with in at noon. There is a cable car going up for about 50 ILS. As soon as we got to the summit of this mountain, we figured, why going it’s recommended for the sunrise. I have never experienced such heat anywhere. Maybe in Death Valley in August. Without exaggeration, it was like 65°C on the sun (there is no shade up there anyways). Yeww. However, the landscape was so beautiful that we couldn’t just give it up, so we spent more than an hour up there.

Historic part of this place is not less interesting than the place itself. For example, when this fortress was conquered by the Romans, the local soldiers killed themselves (including women and children), rather than being captured by the Romans, and the last one committed suicide. That’s what the legend says.

We came back to life in the air-conditioned souvenir shop where a Slovak girl noticed us. That was the first moment, when we met someone speaking our language. She heard us in the cable car where we were discussing a very delicate topic with the conviction that no one understands us. We were laughing together for about 15 minutes.

When we finally got back, we jumped into the car and started driving towards Eilat, where we were supposed to drop-off our rental car. I was 100% sure that it was about an hour and a half from Masada but the navigation showed us that it was two and a half.

My mom hit the gas really hard, so all my pictures I took from the car are blurry, including the one when I tried to capture the sign saying “FIRING ZONE ON THE RIGHT !!!”

We reached the rental office two minutes before they closed. My mom dropped me off, so I could delay them and meanwhile my mom drove to a gas station to get some gas, which itself is quite an experience when you don’t understand a single letter on the pump. When she finally got there, the dude behind the counter was really irritated when two crazy girls got there at the time when he was so ready to go home.

Eventually, we managed everything 🙂 and spent the evening in downtown Eilat.

The last article will be from Jordan & Petra, so stay tuneddddd guyssss! 🙂