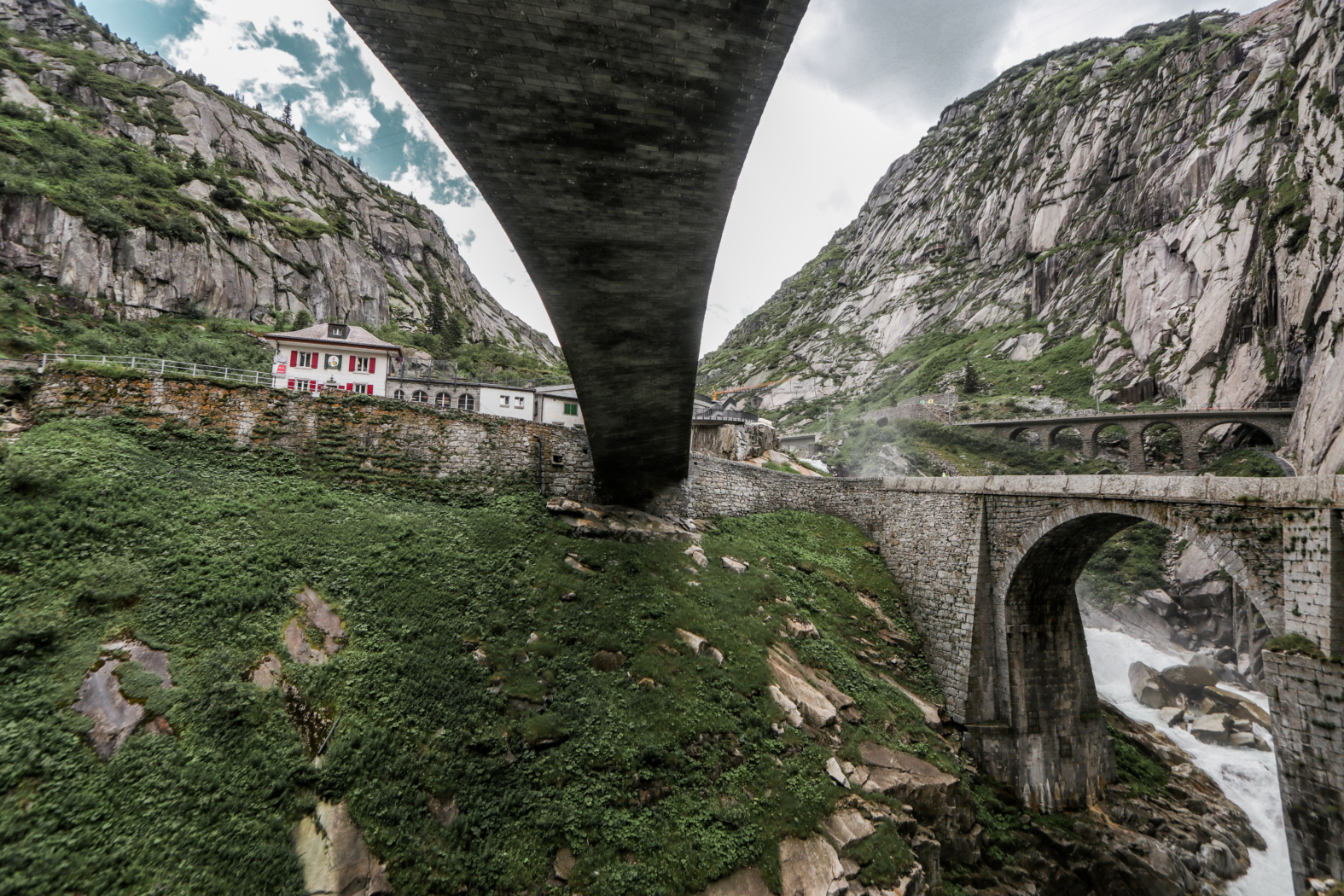 Today’s article is dedicated to the Schöllenen Gorge and the three iconic bridges. One of them may be known as Teufelsbrücke (or “Devil’s Bridge”).  This place can be found in the very center of Switzerland. The bridges run across the Reuss River, which also flows through the picturesque town of Lucerne (if you haven’t been there yet, I highly recommend it. It is a matter of three/four hours and it’s definitely worth it!).

This fantastic spot can be found right by the road and doesn’t require hiking. But of course that means one thing – there are a lot of people. You can park right next to the road, where there is a huge parking lot.

And what can you see here?

In addition to the gorge with gushing wild water, you can admire the three bridges already mentioned. The first of them was built in 1230 and was made of wood. Today they are all made of stone. There’s the iconic red Swiss Glacier Express train going across one of them every 20 minutes. The train then enters the oldest traffic tunnel in Europe. Another bridge is used only by cars. And the third one is for pedestrians. But the strangest thing is that for some reason, it looks like these three bridges are somehow connected or even tangled into each other.

And why did locals name the bridges after the devil? The river is so wild in this part, that from time to time the rocks fall. Thanks to the echo, the terryfying sounds can be sometimes heard all the way in Andermatt. The locals explained these frightening sounds to the presence of the devil. The second version talk about a story, when the locals wanted to build a bridge, but the harsh mountain conditions made it very difficult. Even though they managed it several times, the bridge was always torn down by an avalanche. That is why the locals called for devil’s help, who built the bridge in exchange for the first soul to cross the bridge. In the end, they sent a goat first across the bridge and outsmarted the devil.

If you go down the river, you will see several military tunnels along the way. They were used during World War II and the Cold War. They can still be walked through to this day, but it’s nothing for claustrophobics and two-meter-tall guys!

Yes, you can really find a small piece of land that belongs to Russia. It’s a lookout and a memorial carved into the rock. The Swiss donated it to the Russians for helping in the battle against Napoleon.

Directly above the gorge you will find one ferrata. Unfortunately, we didn’t have time or equipment to climb it, but given its location, I bet it must be a fantastic experience!