Christmas in Hawaii – lava and volcanoes in Big Island 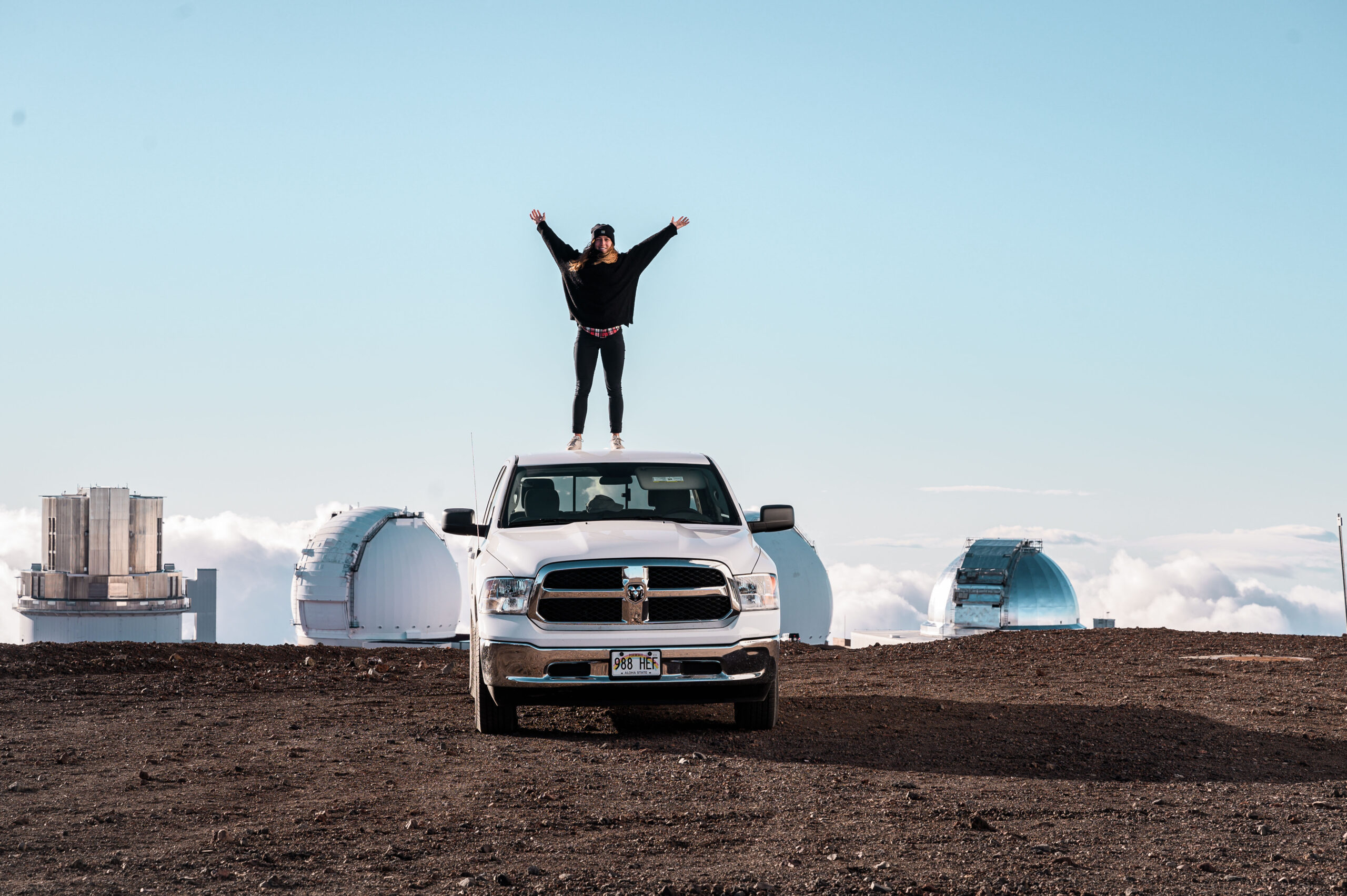 Here is the last article from Hawaii – this time from the largest island. Hope you saw my articles from Maui, Kauai and Honolulu too! The Big Island is known for the volcanoes Mauna Kea and Mauna Loa, so you probably already know that a large part of the inland is made up of lava fields. There are also a number of beautiful beaches that are worth a swim. But let’s start from the beginning.

We arrived at the airport in the afternoon. The airport looked like a small shed with a few gates.

We went straight to the car rental. Our booked economy car was not ready yet, so they offered us a huge RAM 1500 pick-up with a six-liter engine for the same price. I almost passed out when I heard this. I knew that a RAM consumes more than the two of us combined, but I wouldn’t give it up for anything. I also suspected, that we would be arguing all week about who would drive.

Our first stop was Makalawena beach. To get there we had to walk through the lava field for about half an hour. Not only was the beach beautiful, clean, with turquoise sea, but we were there completely alone.

Then we drove to the next beach that you guys recommended to me on Instagram – Kikaua Point. And here we found paradise. It was the most beautiful beach we saw in Hawaii. Wait, didn’t I say that already? There were more turtles than humans and the ocean was unreal.

In the afternoon we managed to do a short hike to Pololu Valley lookout and Awini Trail to Nui Lookout. In the evening we drove along the beautiful scenic road Kohala Mountain Road. Laupahoehoe camp was our hotel for that night but we arrived so late in the evening that we had to pitch our tent in the dark. We appreciated how amazing the camp was in the morning. Breakfast by the ocean with the rising sun in the background – could that be more awesome?

In the morning we set out for the sacred Waipio Valley. It’s a valley where Hawaiian kings used to live. One of the steepest paths in the world leads to the valley. At some point it was up to 40 degrees steep. For this reason, a security guard checks every car at the top and only cars with 4×4 are allowed to drive down.

We parked in the valley, crossed the river and chilled on the black beach for a while. Then we headed to the beginning of Waimanu Trail. It’s a multi-day trek to a different valley, but we wanted to see at least a part of it. It was very hot, so we dragged ourselves only to the first lookout point and then turned back. On the way back from the valley, we took two hitch-hikers on the back of our truck. Guess they didn’t want to walk that super-steep hill, which must have been pretty exhausting.

Then we drove to the town of Hilo to get some proper coffee before arriving in Volcanoes National park. First we pitched our tent at Namakanipaio campsite and then headed to the visitor center. A super-nice ranger helped us figure out the plan by recommending hikes & places to see. We followed his advice and it definitely paid off.

First we went to Steams Vent, which is a short walk overlooking Kilaueu crater. The steams are caused by water entering the hot volcanic rocks and returning to the surface as steam. It’s a bit disturbing, feeling the amount of energy under your feet. Kilaulea is the most active volcano in the world. Twenty years ago, lava from its eruption flooded two cities and also a part of the main road. Eruptions occur quite often here. Thanks to them, the Big Island has also increased its area by about 200 hectares. U fortunately, we were not lucky to see any flowing lava because Kilaulea was calm.

Then we went on the Devastation Trail, which is a relatively short walk through the area where the eruption destroyed the forest and covered it with millions of tons of volcanic ash. We also walked along the road which was destroyed by an earthquake.

In the morning we set out for the sea to check out the Holei Sea Arch. Also we drove the whole Chain of Craters Road, which leads directly between the lava fields. It is said that the goddess Pele lives in Kilauea volcano and the solidified lava is her hair. In fact, it really looks like that. I tried to shoot some cool footage with my drone – you can see how it went in my video.

Then we went to Mauna Ulu, a volcano that last erupted in 1974. I flew over it with a drone, so you can see the whole crater, which is actually huge. From above is the only angle to see this beauty completely.

Then we finally headed to see the sunset on Mauna Kea, which is the highest volcano in the world and actually the highest mountain in the world, if we take it from the real bottom, which in this case is underwater. Mauna Kea is 10,205 m high, so it’s actually higher than Mount Everest, but it’s unfortunate that its 5,000 m lies below the ocean surface. In any case, it’s the highest mountain of the Hawaiian Islands, so we could not skip exploring it.

There are many huge telescopes on top of Mauna Kea, including NASA’s equipment. The largest telescope in the world is even being built here. The top of Mauna Kea very often rises above the clouds, so there is a minimum of light smog. Therefore it’s perfect for stargazing. Thanks to the observatories,there’s a road all the way to the top, so this time it took us no effort to conquer the summit. Again, only 4×4 cars are allowed on the top since a part of the road is gravel, but we did see a few daredevils with regular cars. If going up, it’s compulsory to stop at the visitor center to acclimatize to a higher altitude.

We went crazy at the top. I don’t know if we were a bit high from the thin air, but we were running around, taking hundreds of pictures. While waiting for the sunset, the wind was getting stronger and stronger, the temperature was around 6°C below zero, but it felt much colder. The sunset was absolutely EPIC! My hands almost froze, but it was worth it. I finally believed that there’s snow here sometimes and people sometimes even ski here! In Hawaii!!

On the way back to Kona, we stopped at Kau Coffee farm. The area around Kona is famous for its coffee, which is really excellent. It is said to be the volcanic soil that makes the coffee so good. In addition to a great guided tour, we bought several kilograms of coffee, macadamia nuts and other yummies right in the farm.

The next stop was a food stop. Ponaluu Bakery is supposedly the southernmost bakery in the USA. Last food stop was by Paradise Meadows, a local farm with delicious desserts and a coffee.

Since we were there already, we visited the southernmost point of the USA called South Point, where we admired the locals who were jumping from high cliffs into the ocean.

We slept in a beautiful campsite called Hookena Beach that night. It was so awesome, that we even opened a bottle of champagne by the sea, while staring at epic sunset. Usually we bring a small bottle of champagne to every trip and drink it on top of the highest mountain, but it was so cold on Mauna Kea, that the bubbles were the last thing we thought of.

In the morning we explored one last park – Puuhonua NP, again a sacred place of the Hawaiian kings. It’s a beautiful place full of traditional Hawaiian Tiki statues, temple remains and original dwellings. That energy is incredible.

Then we started heading towards the airport. On the way, we stopped at several beaches again to have one last swim. For that we chose the beautiful Kikaua Point beach, still full of turtles. We spent the last night in the Kohanaiki Beach campsite, from where we only had a short drive to the airport.

We returned the car and flew to Kahului through Honolulu in the morning. A few hours later, we were sitting on a plane to New York. We stayed in New York for one more night, did a lilttle bit of shopping, and satisfied, rested, happy, tanned and full of experiences and photos, boarded a plane to Munich the next morning.

I don’t understand where that month went. It was definitely one of the most beautiful destinations I’ve been to.